Online roulette history starts with the first internet casinos that started popping up in the mid to late 1990’s. The history of roulette itself is quite a bit older, hundreds of years in fact. The game of roulette dates back all the way to 1655. A French mathematician by the name of Blaise Pascal devised the first roulette wheel which came about as a byproduct of his failed attempts at creating a perpetual motion device.

The game had undergone a number of changes and has been played in its present form since about 1796. The word roulette in French means “little wheel” and the roulette wheel is what is used to determine the outcome of any wagers placed on a roulette table.

The single zero wheel, which is common throughout Europe, was introduced in 1843 in a German casino located in the town of Homburg. Early forms of roulette in America used a wheel with 28 numbers plus a single zero and a double zero. In the 1800s roulette began rapidly spreading across Europe and the United States and quickly became one of the most popular casino games.

In the mid 1800s many European countries were abolishing gambling and it was at this time in the 1860s that Monte Carlo started to become one of the top destinations in the world for gamblers. The single zero wheel flourished in Monte Carlo and spread to many other parts of the world except for the United States where the double zero wheel was and still is used today. 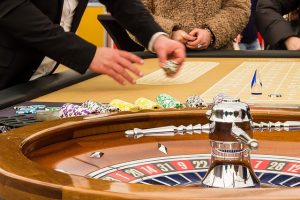 Roulette has been around for hundreds of years and various systems and methods for beating the game have probably been around just as long. Most betting systems rely on some form of either a positive or negative betting progression or even some combination of the two. For example, one of the most popular or at least widely known betting methods is known as the martingale system. With this system you would double your bet after each loss until you eventually win. When you finally do win you would be ahead one betting unit at which point you could either stop playing or you could start a new session.

The problem with a system that involves doubling up after each loss is that you can quickly find yourself in a situation where you are betting extraordinary sums that exceed the table limits. There are a number of other systems that players try to use. Some will increase bets after a win rather than doubling up after a loss. Other systems increase one unit after a loss and decrease by one unit after a win. Their many variations of progression betting systems but all of these systems share a common flaw. Betting systems give players an opportunity to win small bets with a fair amount of frequency but when the inevitable loss occurs, the losses will be for much more than the total sum of all of the small winnings a player had been able to achieve.

Roulette is a negative expectation game in which the house has a mathematical advantage that cannot be overcome by a betting system.

Can a Game of Roulette Actually Be Beaten?

One of the most interesting chapters in the long history of roulette is the story of people that have actually been able to beat the game. Beat an unbeatable game? how did they do it? Over the years a number of smart and perceptive people noticed and learned how to capitalize on biased wheels. The first, and one of the most notable, people to do this was Joseph Jagger.

Joseph Jagger was a British engineer that theorized that the numbers that come up on a roulette wheel may not be as random as they should be and that the mechanical imbalances in a roulette wheel may cause certain groups of numbers to come up more often than they should. In 1873 he put his theory to the test by hiring six people to record the results of six roulette wheels in a casino in Monte Carlo. After studying the data that his hired help recorded Jagger noticed that one of the six wheels showed a significant bias in which a group of nine numbers occurred more frequently than the laws of probability would dictate.

After taking some time to study the data collected at the Beaux-Arts Casino in Monte Carlo, Jagger was ready to place wagers and put his ideas to the ultimate test. In July of 1873 he placed his first bets and quickly won £14,000. Over the next three days he ran his total winnings up to over £60,000. The casino took certain countermeasures like moving the wheels and even rearranging parts of the wheels. Eventually Jagger lost some of his money back and after a two day losing streak he decided to give up, but not until he had already amassed over £65,000 in winnings. This is a substantial amount of money but keep in mind this was back in 1873 and in today’s money that would be well in excess of £3,500,000.

A number of other people have had success with finding and taking advantage of biased wheels over the years. In America, in the 1930s, some gamblers were able to consistently win at roulette by taking advantage of dishonest games and rigged wheels. If any players were making large bets these clever gamblers would bet opposite the largest bets on the table and they were able to make some nice profits.

In 1961 technology was used to defeat the game of roulette the first time. Dr. Edward O. Thorp, who was famous for his book “Beat the Dealer” which devised the first winning card counting system for winning at blackjack, developed the first wearable computer that could time the rotation of the wheel and the ball and predict the area on the wheel in which the ball would eventually come to rest.

In the 1970s a small group of physics students from the University of California Santa Cruz came up with a similar method of using a small computer to predict where the ball would land. The students developed their method by purchasing a roulette wheel and studying the outcome of thousands of spins while using a camera and a oscilloscope to keep track of the motion of the wheel and they eventually developed a complicated mathematical formula to accurately predict where the ball would land.

The calculations were quite complicated so they developed a small computer that could be concealed in a shoe. The person wearing the computer would input data by tapping their big toe on a small switch. A vibration would then tell the player which section of the wheel to place their bet on. After two years of development the computer was ready to use and they took a trip to Las Vegas. The team profited approximately $10,000 but glitches and equipment malfunction eventually contributed to the students giving up on this project.

To make money off of a biased wheel takes a great deal of patience and hard work. It is a difficult way to make easy money.

The first internet casino opened in the mid 1990’s. Microgaming Software Ltd developed the first software for online casinos in 1994. Since then hundreds of onlinie casinos have opened for business and each casino offers a multitude of games including blackjack, craps, bacarat, video poker, slot machines, and of course roulette.

Roulette has been a popular casino game for hundreds of years and enjoys a great deal of popularity in todays online casinos as well. The strategies of the biased wheel betters won’t work on the internet version of the game because there is no actual wheel being spun. The numbers are determined by a random number generator and this is what the players rely on for the outcome of their wagers.

To play online roulette you simply sign up for an account at your favorite online casino, deposit some money, and place your bets. If you are new to the game and you are a little nervouse about jumping right in you can play for free and learn the game without risking real money. You can then play for real once you’ve had a chance to become familiar with the rules and the various bets and payouts.