The following online roulette glossary will help you familiarize yourself with the common terms used when playing roulette. Learning the terminology will help to give you a better understanding of the game. 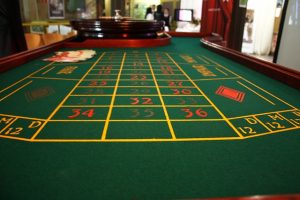 The amount of money wagered either on a particular round of betting or in a given session of play.

This version of the game has 38 numbered slots on the wheel consisting of the numbers 1 through 36 as well as a 0 and a 00. That house advantage in the American version of Roulette is 5.26%

The stationary outer rim of the roulette wheel where the ball is spun. Also referred to as the ball track.

The total amount of money that a player has available for gambling.

A wager that covers 12 numbers in one of three vertical columns on the roulette table.

A single wager that covers two or more numbers at a time.

An inside bet that is placed at the intersection of four numbers and pays off at 8 to 1.

The dealer of a roulette game.

Another name for the American Roulette wheel.

The European roulette wheel has 37 slotted spaces on the wheel consisting of the numbers 1 through 36 and a single zero.

A bet that pays off at 1 to 1. In roulette the red, black, odd, even, low and high bets are even money bets.

An outside bet that pays off at 1 to 1 and covers 18 numbers at a time. The player is wagering that either an even number or an odd number will come up depending on which one they choose to place their wager on.

An outside bet that pays even money. The player is wagering on either the numbers 1 through 18 or 19 through 36.

A wager placed on the numbered portion of the table layout. The wager can be on an individual number or cover multiple numbers at the same time.

When a player wins a wager and leaves the original bet plus the winnings on the table to be bet on the next spin.

An outside wager covering 18 numbers at a time, either all 18 red numbers or all 18 black numbers. A winning wager pays even money.

The European version of the roulette wheel with only one single 0 green slot.

An inside bet covering six numbers at the same time. A winning bet would pay 5 to 1.

Each round of play in roulette is referred to as a spin.

An inside bet that covers two numbers at a time and pays off at 17 to 1.

An inside bet on one single number. A winning wager on a straight up bet would pay off at 35 to 1.

An inside bet that covers 3 numbers at a time and pays off at 11 to 1.

A circular device with colored and numbered slots that is used to determine the outcome of the game.